Lorenza Romanese, Managing Director of the European Industrial Hemp Association (EIHA) examines the future of hemp and explains in this vein, what is at stake, as well as looking back at its fascinating history.

Hemp has provided essential raw materials and a high protein and health-promoting food source for centuries, more likely millennia. The hemp plant has been used for construction, paper, textiles, ropes and other applications contributing significantly to the advance in western civilisation. Hemp was grown in Europe and most countries worldwide until the 1930s, after which cultivation got almost eradicated.

Since the end of the 20th century, hemp is making a comeback and is emerging as one of the most rapidly growing agricultural and industrial markets that have emerged for decades.

To clarify, we are talking about “hemp” (Cannabis sativa L.), which is authorised under the EU’s Common Catalogue of Varieties of Agricultural Plant species (Reg. 1308/2013) and contains less than 0,2% of THC, which means it is not psychoactive.

The world is facing enormous challenges – how can we transition from high carbon to a low carbon economy? To achieve this, hemp has a valuable contribution to play and offers economically viable solutions to help address some of the major challenges our societies currently face, including pollution, carbon emissions, plastics waste, world hunger, people’s health, lack of jobs and rural underdevelopment.

What are the key benefits of hemp?

The production of Hemp is carbon negative, which means it absorbs more carbon from the atmosphere during its growth than is emitted by the equipment used to harvest, process and transport it.

Also, hemp can be a profitable cash crop for farmers when permitted to utilise the whole plant.

What are the barriers to growth?

Almost 60 years ago, the hemp plant, which was widely used as food for centuries, was erroneously designated alongside the cannabis (marijuana) flower as a narcotic substance in the UN Single Convention. This has caused a lot of confusion as cultivation of cannabis plants for industrial purposes is clearly exempted from the scope of international control because the industrial hemp sector has been severely restricted in terms of onerous licensing procedures and unclear and complex European and national regulations dealing with hemp-derived food products.

Hemp foods and drinks from flowers leaves and extracts re-emerged in the 1990s. In response to the introduction of the Novel Food catalogue in 1997, the hemp industry collated data about the volume of sales and product types which use hemp flowers and leaves and submitted it as requested. In 1998, the hemp industry received written confirmation from the EU (PAFF Standing Committee) that: “it was decided that foods containing parts of the hemp plant do not fall under the EU Regulation EC258/97 on Novel Foods and Novel Food ingredients.” The second letter from PAFF confirmed hemp flowers and leaves are food ingredients.

Hemp naturally, abundantly contains cannabinoids, is best known as cannabidiol (CBD). In the 21st century, awareness is rapidly increasing that consuming healthy foods and supplements can be an important factor for our overall health and wellbeing. This prompted the introduction of hemp extracts in food supplements, commonly known as CBD oils. The reason hemp foods is so important to our health is that all humans and vertebrates have an important physiological system, the endocannabinoid system (ECS). The ECS fulfils a vital role and aids homeostasis. Whilst our body produces its own, so-called endocannabinoids, this is not necessarily sufficient and we can maintain and support this important physiological system by consuming phytocannabinoids, as we used to do for millennia. 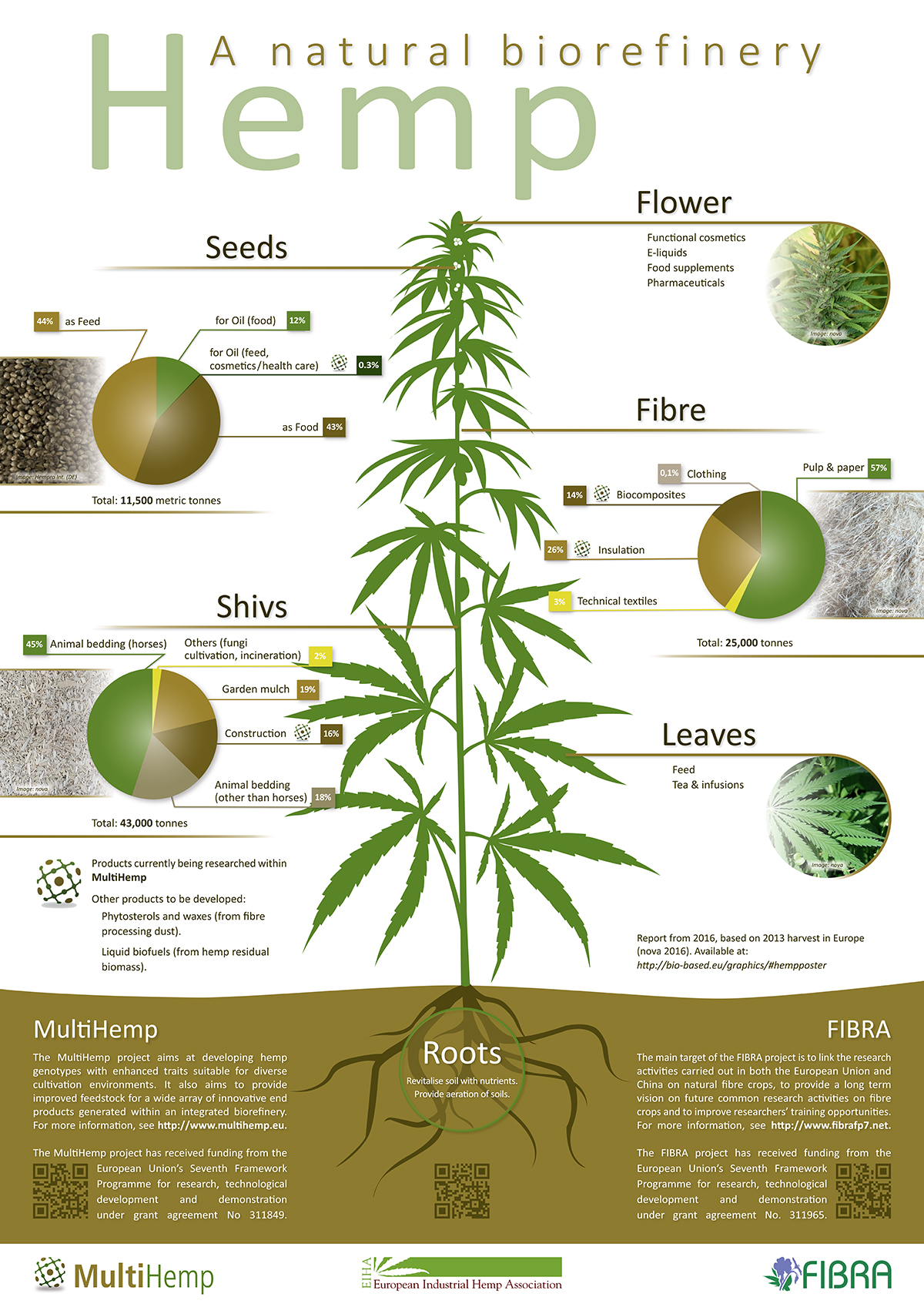 Hemp flowers, leaves and extracts are a traditional food

Historical records show that naturally rich in CBD/cannabinoids hemp oils, flowers, leaves and hemp extracts were widely consumed. It was an integral part of our European diet.

During the last three years, the popularity of CBD containing food supplements prompted the PAFF committee to revisit the permitted consumption of hemp products and on 20th January 2019, the same committee that previously acknowledged in writing to the hemp industry 20 years earlier, that hemp flowers and leaves is a food now changed their minds and changed the Novel Food catalogue only permitting seeds for food use. Overnight the legitimate hemp foods industry was declared novel, meaning there is no history of consumption prior to May 1997.

In response, EIHA has prepared pieces of strong, extensive evidence that hemp cannabinoids/CBD have been consumed in Europe for centuries (insert a link to the evidence). One of the oldest cookbooks in the world, De Honesta et Voluptate (1475) lists a recipe on how to make modern-day CBD oil, medieval monks ate hemp soup, an Italian recipe (1887) shows how to make hemp flower tortellini, a Polish cookbook lists hemp as a vegetable, the Maltos-Cannabis Hemp Extract drink won a prize at the World Exhibition in Antwerp in 1894 and more. This evidence clearly shows that it is disingenuous to argue that leaves and flowers in food are novel today.

Why is the use of the hemp flower and leaves so important for the entire hemp industry?

The hemp flower and the leaves are the most profitable part of the plant. If the hemp sector is only allowed to use the seeds and stalks, alongside onerous licensing procedures, this is simply not sufficiently financially viable and undermines investment into R&D and the development of large- scale, next generation, environmentally responsible industrial and consumer products. The recent rewording of the Novel Food catalogue, therefore, threatens the entire European hemp industry as the process is expensive and a novel food application takes several years to assess.

Due to the fact that the hemp industry received written confirmation from the EU (PAFF Standing Committee) in 1998 that hemp flowers/leaves are permitted for food use and the hemp industry can provide ample and substantial evidence that naturally occurring CBD has been in the human food chain for millennia, we request that our extensive evidence is considered and that the novel food catalogue is reworded, permitting hemp foods containing cannabinoids/CBD up to levels that are naturally present in the plant (which was the status in 2018). This means that CBD containing food supplements contain no more than we would naturally consume if eating traditional hemp foods.

So, what is at stake?

The Hemp plant is capable of helping to solve some of the core issues we face:

“CBD has been found to be generally well tolerated with a good safety profile.” Excerpts from a letter of WHO Director General to Secretary-General of the United Nations, July 23, 2018

“The Science Museum’s three-storey building is constructed using a hemp-lime envelope and was so effective that they switched off all heating, cooling and humidity control for over a year, maintaining steadier conditions than in their traditionally equipped stores, reducing emissions while saving a huge amount of energy.” Dr Mike Lawrence is Director of the University of Bath’s new research facility, the Building Research Park

“It has been calculated that the serial implementation of the lightweight biomaterials on the high-volume vehicles will deliver a reduction of 40,000 tons of CO2 emissions and the ability to drive an additional 325 million kilometres with the same quantity of fuel.” Source: Autocar Pro Newsdesk 3/2018.