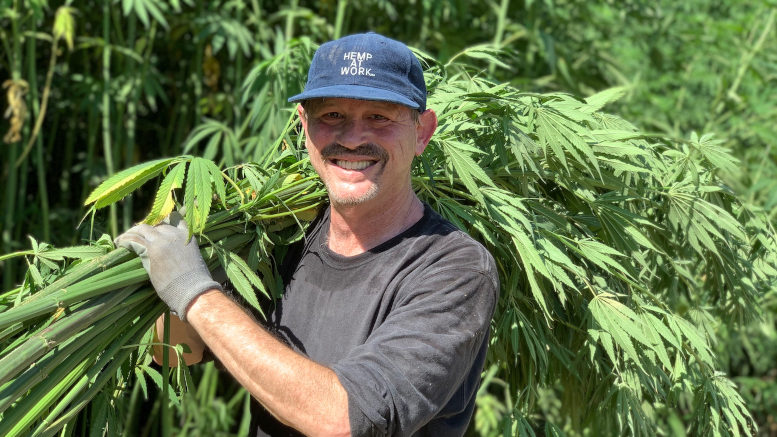 INTERVIEW: A 31-year veteran of the hemp industry, Lawrence Serbin is president of California-based Hemp Traders, which he founded in 1994. He started Cannagrove, a producer of engineered hemp “wood” particleboard in 2018 after having researched such material since 2005. Serbin is past national director of the Business Alliance for Commerce in Hemp and past president and director at the national Hemp Industries Association. He served as chair of the California Hemp Advisory Board for the California Department of Food and Agriculture from 2017–2020. He is currently working to bring decortication, processing, and spinning facilities online to support the U.S. hemp construction and textile sectors.

HempToday: You have a wide, wide assortment of hemp products at Hemp Traders. What kind of products are trending now?

Lawrence Serbin: We have always sold hemp textiles, but at this moment, there is definitely a surge in the interest to use hemp as an environmental alternative to other fibers in textiles.

LS: Perhaps. China has lower production costs due to a lower standard of living, so there is going to be a cost-benefit to working with China. And it is fairly inexpensive and environmental to ship things to and from China by boat. But we do have an opportunity to grow hemp in the United States.

HT: How is your work going with respect to bringing farmers and processors online to support the development of a U.S. supply chain for textiles and building materials? How do you see the investment picture shaping up there?

LS: Very well. We are growing our first farm size test crop in California’s Central Valley. The information we are getting this year will allow us to grow on a commercial scale in 2022. We have also set up a fiber processing facility near to where the hemp is grown.

HT: What are the economics of the hemp particle board you developed at Cannagrove? Is it even fair to ask, at this point, for price comparison with conventional wood-chip particle board?

LS: The first boards we made were more expensive than regular particleboard mainly due to having to ship the raw materials around the country to the factory that could produce it. The shipping costs were half of the cost of making the board. But when the hemp is made at a facility that is near to where the hemp is grown, it becomes much less expensive. And now with the higher costs of regular wood particleboard, hemp is going to be a less expensive alternative.

HT: What’s happening with hemp building materials in general? Do you see any significant movement in that market?

LS: One main problem with the hemp building market has been a lack of raw materials. Mostly we have had to import them. As we begin to grow more hemp in the United States for fiber, there will be much more material available at a lower cost. This will be what kick starts the hemp building industry.

HT: How do you see the arc of production for such biocomposite products going forward the next five years?

LS: I think we will see 2021 and 2022 begin to establish the markets for hemp fiber products and grain. After that, there will be a huge increase in demand with farmers increasing acres devoted to fiber and grain.

HT: Some parts of California don’t seem very friendly to hemp. What’s up with that in your state?

LS: There are two things going on. Some areas of the state have a history of marijuana production. Those areas are concerned that high CBD hemp flower varieties might cross-pollinate with their crop and lower the value. In other areas where people have grown for CBD, a pungent odor of cannabis around harvest time has had people complain. Overall there is overregulation of the hemp industry, especially when it comes to fiber crops, which don’t even produce a flower.

HT: When you started in hemp three decades ago, did you think the industry would develop faster than it has?

HT: Thirty-one years is a long time in hemp. You must have one or two heroes.

LS: There are a few people I admire. Canada legalized industrial hemp in the late 1990’s and two companies emerged to fill the demand for hemp foods. Hemp Oil Canada founded by Shawn Crew and Manitoba Harvest founded by Mike Fata. Those are good examples of what a professional hemp company should look like.